Former Kent County Councillor Brian Clark and Maidstone Borough Council candidate Joe Higson are seeking your views on a proposal to improve road safety in Willington Street by creating a new pedestrian crossing in the vicinity of School Lane and Chapman Avenue.

What is the proposal?

The proposal is for a new pedestrian crossing, to be implemented within in the marked area shown in the plan below: 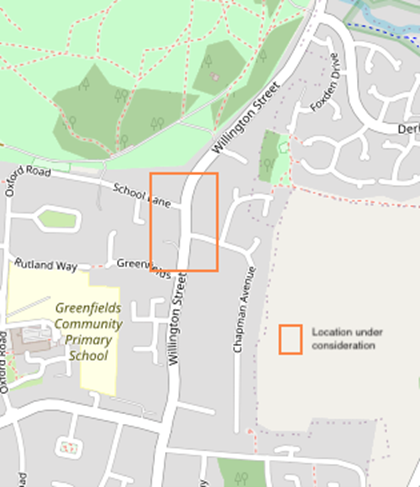 Why is this proposal being made?

Concerns have been expressed about safety of pedestrians, especially children, while attempting to cross Willington Street at this point. This has been identified as a route parents and children take to reach and return from Greenfields Community Primary School and Madgingford Primary School which are located nearby.

The scheme would involve assessment of the site and implementation of a pelican crossing within the marked area. Further consideration may also be made for other crossing types based on suitability at this location.

Brian is a serving member of Maidstone’s Joint Transport Board where he works with Kent Highways and MBC. During his time as the local county councillor, Brian worked with officers at KCC to review the potential of a pelican crossing at this location. At that time the cost was considered prohibitive by Kent Highways and a subsequent review of suitability to implement a central pedestrian “refuse” showed the roadway to have insufficient width (necessitating modification to footpaths for implementation). Such modification was also considered prohibitively expensive at that time.

With active travel a prime consideration during the pandemic, the parameters used in considering suitability of transport schemes have changed and this informal consultation intends to consider the level of public support for a crossing at this time.

Brian and Joe will collate the responses to this informal consultation. If there is sufficient support for a pedestrian crossing, they will submit the evidence to Kent Highways with a view to progressing this proposal.