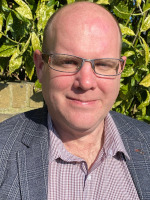 Tom has a background in supporting some of the most vulnerable people in Kent, through his time working with a local charity. He moved to Allington 4 years ago and is now a vineyard Manager in Kent, working for a major UK wine producer.

Tom says: “Tackling the problems and concerns raised by local residents will be my number one priority if elected in May. I am determined to effectively challenge the over-development being forced upon our area by the 'Build, Build, Build' ideology of the current Conservative Government. The linked problem of traffic congestion and pollution is another priority. This is why I am supporting the local Lib Dem campaign to prevent the closure of Park and Ride by Conservative Maidstone Council. Environmental issues and fighting to protect our countryside wildlife and local green spaces have never been more important.