This summer the Maidstone Mela, a community gathering with music, food and art from around the world celebrating the diversity of cultures that make up Maidstone’s population, was held in Whatman Park, attracting 3000 visitors. At the event, Cllr Derek Mortimer took to the stage to highlight the importance of one of the South East’s largest summer events, and the clear need to re-instate Mote Park as the annual location.

Following the event Cllr Mortimer said, "The MELA is now so popular that the Whatman Park location just isn’t suitable, with difficult access especially for stallholders, and a general lack of facilities, especially toilets". 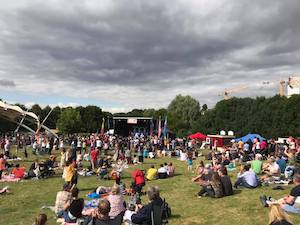 He continued, "The MELA, which gives an important boost to Maidstone’s economy, used to be held at Mote Park, where up to 10,000 visitors would attend. Many other major events are hosted in Mote Park and this is the obvious setting. The Liberal Democrat group feel this event should show Maidstone at its very best and is therefore campaigning for the MELA’s return to Mote Park, and for the event to be held across a two day weekend, to really showcase Maidstone’s diverse and vibrant culture.”

Lib Dem Councillor Dinesh Khadka has been a member of the MELA advisory committee for 13 years, supporting and promoting this prestigious community event. Cllr Khadka said: "The MELA has proved to be a success story for many years creating a vibrant cultural event for all our residents, which must now move back to Mote Park next year allowing us to provide even better entertainment and improved facilities for all ".

Help us move the Mela to the Mote by signing our petition.