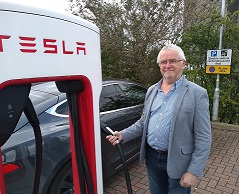 As the number of petrol and diesel fuelled vehicles on our roads rises, air pollution increases and the risks from problems relating to global warming grow. Air pollution is known to shorten lives and reduce the quality of life for tens of thousands of people – both young and old.  Maidstone has some of the worst air pollution in the country outside London.

Mike Thompson, the Liberal Democrat candidate for Boxley Ward, is acutely aware of the issue as he lives in a block of over 100 apartments without a single charging point.

“Planning authorities need to ensure that all new developments are properly equipped with vehicle charging points”, says Mike. “But this won’t address the huge shortfall we have; businesses and main services such as hospitals and station car parks should also provide EV chargers.”

“Morrisons supermarket and a few pub chains are leading the way, but we need many more. I have written to the managers of Tesco in Grove Green and Asda in Walderslade, asking them to make their car-parks ready for customers with electric vehicles as a matter of urgency and I have already received a positive response from Tesco’s.”