20 is plenty for South Ward

Their scheme would reduce the speed limit in the vicinity including the entrance to New Line Learning, Five Acre Wood and Tiger Schools and the Bright Horizons Preschool site. It would also include the entrance to the Boughton Parade Car Park.

They are proposing a 20mph speed limit be implemented in the area. The roads included are shown in the plan below: 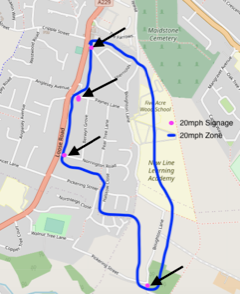 The proposed 20mph speed limit is in response to numerous requests from residents and has been supported by the North Loose Residents Association. Concerns have been expressed about the speed of traffic and the safety of pedestrians, especially schoolchildren, crossing the road at the New Line Learning school site in Boughton Lane and while walking in Paynes Lane and Pear Tree Lane (where the lack of footpath affects road safety).

Brian and Paul have been working with Kent Highways and MBC on highways schemes as members of Maidstone’s Joint Transport Board. The proposal was initially submitted by Brian in July 2019, following an officer request for suggestions for a 20mph pilot scheme. While this plan was not included in the pilot, it was once again proposed for the first round of “Active Travel” grant funding during the early days of the pandemic.

Brian and Paul will collate the responses to this informal consultation. If there is sufficient support for the speed reduction, they will submit the evidence to Kent Highways with a view to progressing this proposal.