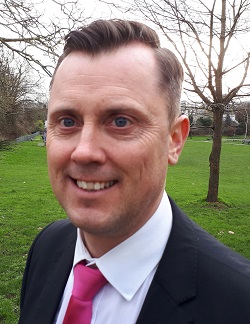 Ben was born and educated in Maidstone including attending Oakwood Park Grammar School. Having obtain a degree in Mathematics, he worked in both Maidstone and London as an analyst programmer and for a business intelligence software company.

After working abroad for a number of years he returned in 2010, trained as a teacher and is now teaching Mathematics at a local Grammar School

He has spent many years living near and working in Bridge Ward and has a detailed understanding of local problems and concerns. He is  seriously concerned about the increasing amount of housing demanded by Government and the affect it has on our area in relation to traffic congestion and air pollution.  He considers both maintaining and improving our green spaces and supporting and improving public transport are both critical if we are to challenge the problems that exist.”

Ben says: ”I am delighted to have been chosen to stand as the Liberal Democrat candidate for Bridge Ward in this year’s Borough Council elections in May and if elected I will work hard for local residents and residents of Maidstone.

Having been educated and now working in Bridge ward in a capacity where I have contact with many local families, I really do believe I have a good understanding of problems that cause concerns to local residents.”