Their scheme would reduce the speed limit in the vicinity including across road frontage of both sides of South Park and will increase safety around Southborough school (building on the 20mph scheme in Postley Road).

What are they proposing?

The proposal is for a 20mph speed limit be implemented in the area. The roads included are shown below: 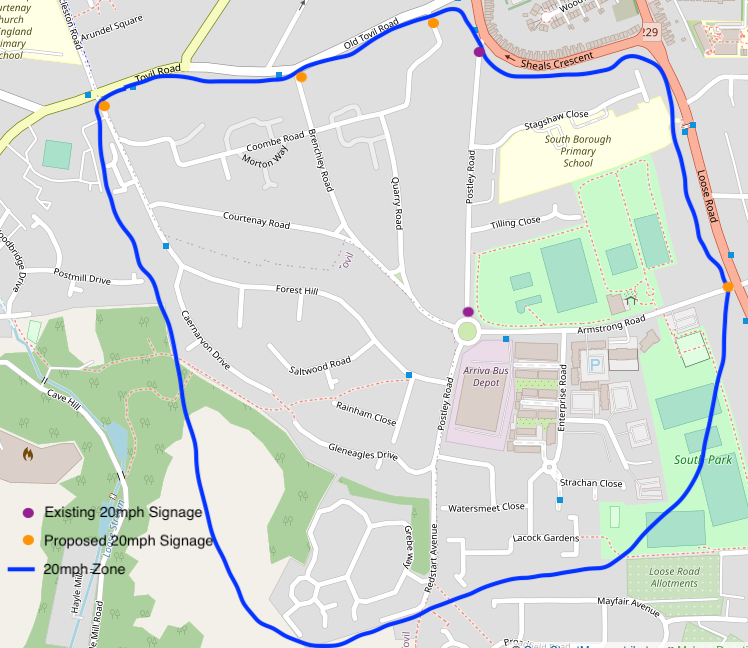 Why do they want to make this proposal?

The proposed 20mph speed limit is in response to numerous requests from residents and has been supported by Tovil Parish Council and North Loose Residents Association. Concerns have been expressed regarding the speed of traffic and the safety of pedestrians, especially children, crossing the road to reach South Park and playing near their homes. Road accident data supports this concern.

Denise and Chris have been working with South Ward Councillors to develop the plan which has been proposed at Maidstone’s Joint Transport Board. A 20mph speed reduction was discussed with the planned junction improvement where Armstrong Road meets the A229 and officers confirmed this could be considered.

The detailed proposal was initially submitted by South Ward councillors in July 2019, following an officer request for suggestions for a 20mph pilot scheme. While the scheme was not included in the pilot, it was once again proposed for the first round of “Active Travel” grant funding during the early days of the pandemic.

How you can help

Should you wish to support or object to this proposal, or if you have any other comments that you feel should be considered with this scheme, please complete the short survey below. Please also considering sharing details of this plan with friends and neighbours in the vicinity.

The deadline for responses is Friday 30th April 2021.

Denise and Chris will collate the responses to this informal consultation. If there is sufficient support for the speed reduction, they will submit the evidence to Kent Highways with a view to progressing this proposal.